Winter gardening at the Urban Ranch

The New Year is already slipping away. As we rush toward February things are happening in the New year. New eye clarity from cataract removal, new kitchen furniture, and garden plans started.

It's an amazing thing to have clear vision again. The dim world creeped up on me without my knowing that it did. About three years ago during a routine Medicare wellness check, I discovered that I couldn't see out of the left eye. Yeah, couldn't even see the Big E on the eye chart.  Yup, nothing but a big white blotch. So I struggled along for another two years before it became so bad that driving was a little dicey. I probably should have had them removed long before I did but I'm a typical guy and drag my feet on doctor stuff longer than I should hoping that it won't get any worse. So now that the dingy sight has been corrected every one looks so much more beautiful and handsome. Colors are ever so much more right and beautiful. In fact I have to re-learn colors because I've been so used to seeing them through a fog that I've forgotten exactly what they're supposed to look like.

In the last blog post I talked about the new kitchen look with new paint on the wall and new furniture. When I got my new eye vision, the wall color looked so different that I thought it was lavender. I had my daughter take a look and she said, "No Dad it's blue just like you thought." So now I really can't trust my colors until I get used to seeing the true colors again. The only change since the last post is a 6 mil plastic cover over the table, the runner, and mats. That way I can just wipe down the table and not worry about having to clean the runner or mats. It works great. I picked up that tip from my sister in Nevada. She always has such a beautiful table decorated for each holiday and covered with a clear plastic cover.

Gardening has started in the basement seed starting station area. In the gardening world there are seed trays with cell inserts to fill with seed starting mix in order to grow plants. For the deep rooted plants like onions there is what is called a root trainer. The trainer cells are about $12 for 32 of them.

As you can see the trainer hinges open for easy access to the root ball and the plant can be taken out to put in the ground or a bigger pot. Nice concept but expensive. Of course my brain thinks about ways to improve or do things myself that would be cheaper. So my solution involves PVC pipe. A ten foot stick of PVC costs less than $4 and a roll of duct tape costs about the same. 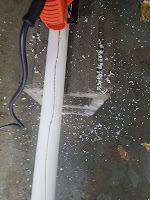 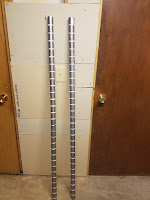 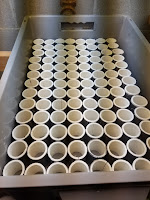 The first step in making my own trainers was to split the PVC pipe length wise. The next step was to put duct tape around the split pipe with the space of a saw blade between the wraps. The final step was to cut the pipe into 2 inch sections which just happen to be the width of the duct tape. 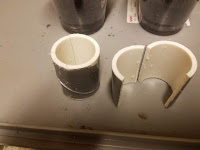 When it's time to put the plant into the ground or pot it up into a bigger pot, the tape is cut through one side of the tape and the plant root ball is fully exposed for easy removal. The root trainer can be reused almost indefinitely with minimum cleanup and a small piece of tape to close up the pipe section. The beauty of these home made trainers is that they can be any diameter from 1/2 inch to 6 inch and any depth.

Onions are going into the tray of root trainers but won't be planted until Valentine's day. It takes about three months of growing inside before the onion plants can be set out in the soil outside. They can be set out earlier than the last frost date of May 15th and light frosts won't kill them but in my experience the plants just kind of sit there and shiver until the soil warms up. So they might as well stay inside and continue to put on some healthy weight. 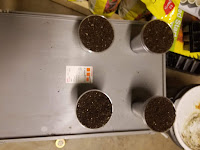 I've been doing some research on growing vegetables in my basement during the winter months. This is the experiment of lettuce. These are 12 ounce cups. There are two cups stacked inside each other. The inside cup has holes in the bottom and soil in the cup. Seeds are planted and every day the inside cup is pulled out of the outside cup to allow about a half inch of water to be poured into the cup. When the soil cup with holes is then set back into the cup with water, it wicks the water up through soil to the top of the soil cup to keep the seeds moist. When the plants start growing, about once a week the water will have a bit of liquid fertilizer is added. According to my research, the lettuce plants can be harvested four to six times before replanting is necessary. So it gives me something to do in the winter to get my hands in the dirt.

So that's what I've been doing .... well between shoveling snow and working on Valentine's cards that is. What's going on in your part of the world.

Welcome to Old Dave's Garden. You will find here a collection of entries pertaining to Old Dave's attempt at building and maintaining a biointensive urban backyard garden and a vacant lot reclamation garden. Hopefully it will be educational but most likely it will be entertaining to read as Old Dave blunders his way through building garden beds and growing vegetables.