Summer Time and the Living is easy?

Summer Time and the Living is easy?

Yikes summer is counting down to fall already.  The year without a spring has drifted quickly toward the end of summer.  My first hearing of the Cicada was last week.  The old Farmers would say that winter was six weeks away but I find that it's more accurate to say that cooler weather is six weeks away indicating the slide into fall. 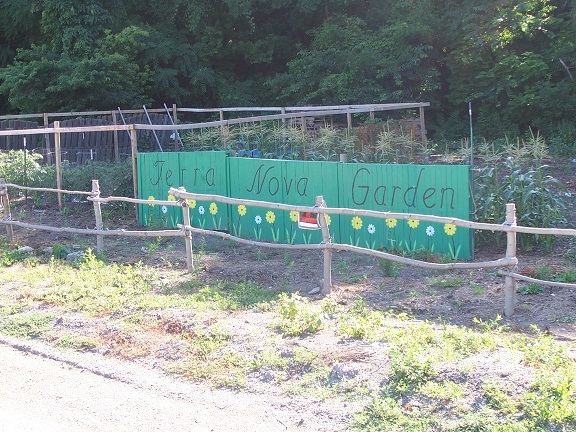 After many hours of work, I'm finished with painted fence panels for this year.  It's been a long process that started with acquiring the pallets to use for this fence way back last December.  All through the winter months and wet spring months design and actual building took place.  The spring weather was not very nice for painting with only a few dry days above 50 degrees.  When the weather finally turned it was a busy time preparing and planting the garden.  As a result much less fence building took place than I wanted.  Not to worry, it's a work in progress and there's always next year.  The only bad thing is that it leaves the sweet corn unprotected from the night shade critters and most likely will be large loss again this year.  I see that some sampling has already started in the first sweet corn patch shown behind the fence. 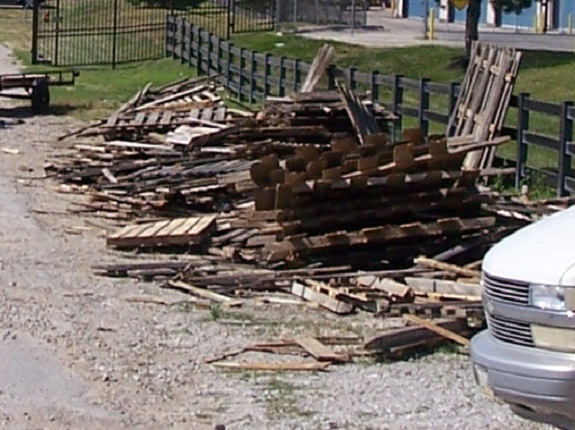 What you see here is a thoroughly picked over pile of old fencing.  I didn't have my camera on the day I was hauling old fence panels but five loads of usable fence panels netted me enough free fence to totally surround the North Terra Nova Garden area.  All I have to do is install about 150 feet of fence.  Yeah, like that will be done this year.  Hopefully, I can get some finished this year. 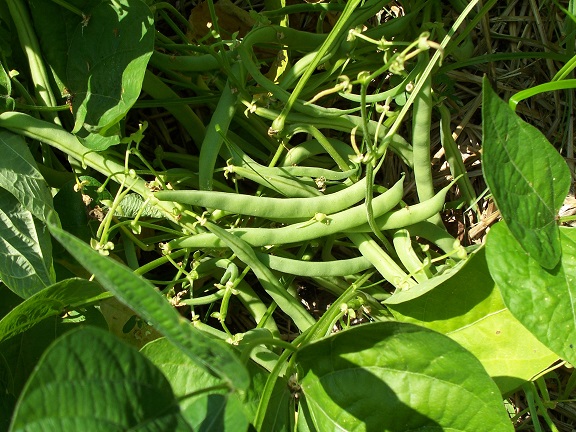 I have stumbled upon the give away vegetable.  Most people have a couple tomatoes and green pepper or two in there back yard.  Green beans seems to be a vegetable that many really like but don't plant in the back yard garden plot.  I planted ten plants in one small backyard raised garden bed.  The harvest from those ten planted came to four and a half gallons of beans.  It came after the micro burst winds of 70 MPH came whistling through and flattened the plants.  Who knew that they would stand up again and produce in abundance?  Certainly not me.  I gave away all but enough for a couple meals for me.  Next year I'll know to plant many more plants. 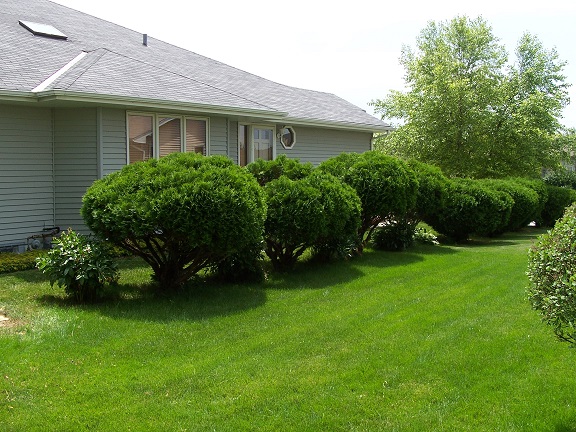 I'm afraid I've gone and done it again.  I just couldn't say no to a friends sister that wanted some bushes removed.  Her husband just died of cancer a few months ag0.  He was the yard man extreme and manicured the yard to excellence.  However she, on the other hand, hates yard work and didn't want to be constantly trimming the bushes.  So out they went.  Each bush was a load for my little truck.  I hauled all five bushes out to Terra Nova Gardens and started a head high brush pile as a boundary along the North side of my property.  The property to the North of Terra Nova Gardens is nothing but over the head weeds giant trees and nasty brush.  So the brush pile actually will keep the weeds from creeping into my garden area and it might be a great place for critters to call home.  Yeah, just what I need, a critter hotel with a ready made garden buffet. Ah, well, at least some one will be well fed from the garden. 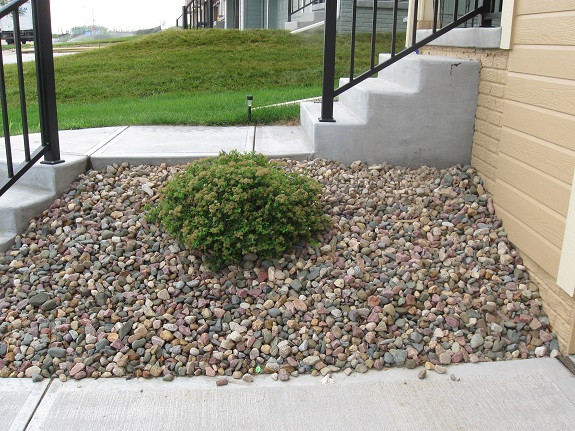 Here's the beginning of another project that I worked on this year.  A friend just bought a house last fall and really didn't like this landscaping that led up to her front door.  She was the designer and I was the builder. 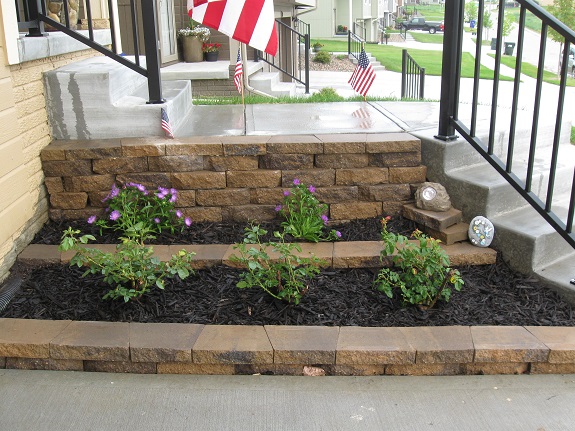 We put our heads together and this is what we ended up with.  She was the one that put the final touches on the flower beds with miracle grow dirt, mulch, plants, and rock decorations.  It was a two day long project.  It took three trips to Menard's for supplies, two day's end muscle soaking showers, two Alieve, four Advil, and a day of rest afterward.  We both thought it turned out really well. 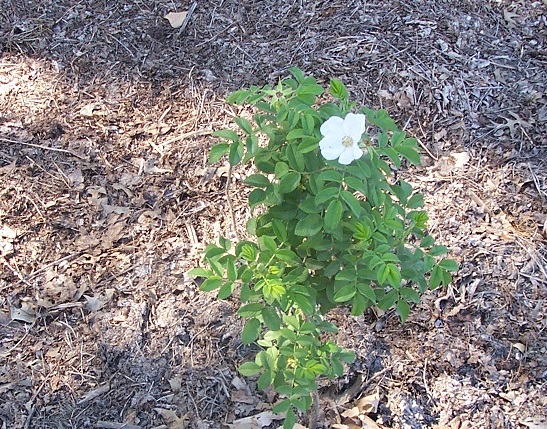 Remember in the last post I was planting the Rugosa Rose bushes I just received.  Well, this is one of them.  I know I should be pinching off the flowers this season to help the bush establish the root system but I just couldn't do it.  I ended up with a double order and planted a total of 49 bushes.  Some look as though they didn't make it but I'm not making that determination until next year.  Some times those bushes look pretty dead until the next spring with they come to life so the final decision to replace will be next spring. 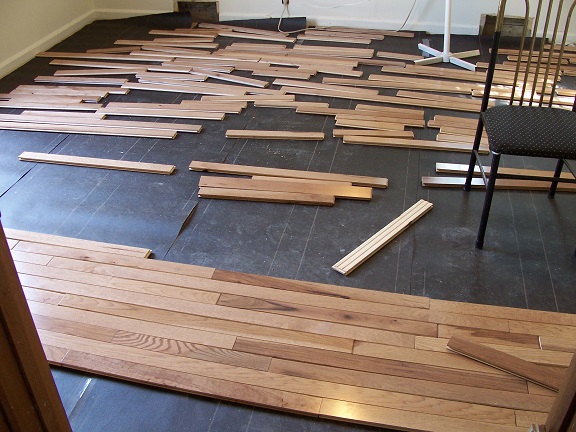 One more project during month of June.  I spent some time with a good friend of mine that moved to Des Moines. This was a floor project.  It would have been a great learning process but we found that when my friend bought the flooring, he didn't have enough to finish this room.  Upon going back to the store he bought it from two years before, the flooring was since discontinued and nothing now stocked would match the floor.  It was a disappointment for him and his mother that was going to be moving into this bedroom.  The above picture was just a dry fit so the flooring could be removed easily.  I'm not sure what they decided to do to the floor before his mother moved into the room.

Well, that's it for now.  Hopefully the next post won't be so long in coming.  Stay cool and healthy until the next time.

Welcome to Old Dave's Garden. You will find here a collection of entries pertaining to Old Dave's attempt at building and maintaining a biointensive urban backyard garden and a vacant lot reclamation garden. Hopefully it will be educational but most likely it will be entertaining to read as Old Dave blunders his way through building garden beds and growing vegetables.